The dream becomes a reality

In February 1997, on a peaceful Sunday morning, a mob of around 30,000 people converged on the small village of Shantinagar, in the rural hinterland of the Punjab province of Pakistan, incited by extremists who falsely alleged that the Koran had been desecrated by Christians of the area. The mob took the 10,000 Christians of Shantinagar and the surrounding areas completely by surprise, looting and setting fire to their homes, leaving them destitute and without anything except the burned out shells of their homes and the clothes they were wearing. The Christians of Shantinagar spent the first night after the attack under the open winter sky without even a sheet with which to cover themselves or their children; terror struck and fearful of further attack.

This incident addressed the need for forgiveness and for reconciliation between the two major communities. Unless there was harmony between these two communities, incidents like the one of 6 February 1997 could be repeated again and again.

Out of the horror and trauma of the dreadful attack on the inhabitants of Shantinagar, and these perceived needs, a dream was born and as a result the 3R (Rehabilitation, Reconciliation and Restoration) Project was launched. SALT Foundation generously funded this project. The rationale behind establishing this Christian ministry was to provide an opportunity for the two major communities to learn to understand one another and grow together in mutual trust and respect, by helping remove the mistrust that exists between them, stemming mainly from an ignorance of each other’s beliefs and viewpoints. It was envisaged that the library would enable the children to have access to reading material beyond that covered by their school curriculum thus giving them and others who would use the library, the opportunity to widen their horizons. Center activities would be geared to a ministry of reconciliation and teaching. 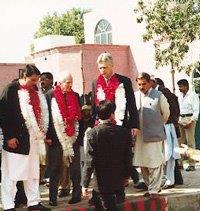 The dream began to take shape with the laying of the Foundation Stone of the Prince of Peace Library and Center (POPLAC) at Shantinagar on 12 March 1997. It was jointly laid by Dr. Anne van der Bijl (President SALT Foundation), and Dr. Justice Nasim Hasan Shah, the former Chief Justice of the Supreme Court of Pakistan, in a symbolic gesture of mutual trust and respect. Also present were Mr. Ijaz-ul-Haq, Member of the National Assembly and Dr. E. J. Schut, vice president SALT Foundation.

Balloons and pigeons were released into the air expressing the joy of the occasion and the peace the Center would strive for.

The messages received from the Archbishop of Canterbury and Primates and Bishops of countries from all over the world, and from members of the diplomatic corps in Pakistan were a source of great encouragement for SALT Foundation. All expressed their appreciation of this initiative and wished it well.

Addressing the gathering, Dr. Evert Schut said that each generation had made the same mistake of having vision limited to its own generation only. He reminded the people that it were they who were shaping the future now and they needed to ask themselves what lessons they had learned from history; what example were they leaving behind and what legacy were they passing on to their children?

He went on to say “The Center shows we are able to learn because it shows a vision which goes beyond our own generation; a vision of rehabilitation, a vision of restoration and a vision of reconciliation; the restorations and reconciliation between two different communities. It is a healing process because we want to look beyond our own generation; for the sake of our children, with the hope that they will one day have a more beautiful world. Let us not let barriers come in the way – barriers of religion, social issues, education. You may say that perhaps this is a dream. Let me quote Martin Luther King who said “I have a dream”; IBADAT, together with SALT Foundation, understands this. We need dreams, we need visions for they are our starting point for our action, and this Center has the vision of such action. It is our generation who has the ability to pass on to our children this legacy. It is our own responsibility for our children’s future and I strongly believe that it can be done with the help of the Lord Jesus Christ. In God’s Word – (Matthew 5) – we read “Blessed are the merciful for they shall obtain mercy; Blessed are the pure in heart for they shall see God. It is my desire that we will be called sons and daughters of God.”

Mr. Ijaz-ul-Haq, recalling the sad incident at Shantinagar, said that this had been the work of a few uneducated and uncivilized people, and did not reflect the feelings of the Muslim community at large towards their Christian brethren. He said that Pakistan’s image had been badly marred in the international community by this incident and apologized on behalf of his fellow Muslims for what had happened.

He said that Muslims understand Christians as both they and the Bible are mentioned in the Koran. He encouraged the Christians to learn more about Islam in order to understand it, and encouraged both communities to live together in peace and harmony. Referring to POPLAC he expressed the hope that this Christian Center would serve as a community center where Christians and Muslims could meet together and learn and grow together. He assured the foreign missionaries present, on behalf of the government and the Prime Minister, that they were welcome to this country to carry out their mission work, without being afraid or without any reservation and to remember that they had their support. He also expressed the hope that there would be more community centers like POPLAC. Mr. Ijaz-ul-Haq also announced that the Zia-ul-Haq (Shaheed) Foundation would make a cash award each year to each student in Shantinagar who secured first position in the final examinations.

Dr. Anne van der Bijl referred to the statement made by the Chairman of the Prime Minister’s Literacy Commission on International Literacy Day “We do not fully realize the relationship between economic prosperity and the development of our human resources.” Stressing the need for development of human resources he said “The Prince of Peace Center is the place where this can happen – it can happen in peace and for peace because violence always destroys those precious human resources and it destroys the environment of peace and stability that is needed for this development.” He said that this was the day of education and we have to take the chance when we have it, so that we can have a tomorrow. There were books in the library and more books would come because of a vision for tomorrow. Tomorrow we want a world that is free of want, violence and injustice, where children could have a wonderful life. Righteousness and peace, he said, could be taught as a result of learning it. Peace is deeply desired by individuals and nations. Two years ago a need was felt for a Center where forgiveness could be taught; forgiveness between individuals and forgiveness on a corporate community level. Much killing had been done in the name of religion, and there was a need to forgive each other; forgiving those who had not asked for our forgiveness even as Christ forgave those who crucified Him. Forgiveness was pre-requisite for entering Paradise and he encouraged those present to seek forgiveness in Christ.  Dr. Anne van der Bijl then announced a personal gift of a computer to the Library and expressed the hope that more computers would be donated for the Library.

Dr. Justice Nasim Hasan Shah reiterated the sentiments expressed by Dr. Anne van der Bijl, which he said had been a message of love and forgiveness and not of revenge. He recalled his previous visit and the sadness and sorrow he had encountered then and the need that had been felt for rehabilitation and reconciliation and to do something to stop the hostility.

He said that Muslims were friends of Christians and they should both live together in peace and harmony. Such incidents were against the teachings of Islam. He said the Library had been built to provide the means to eradicate ignorance. The books would bring enlightenment. The dream had become a reality. He encouraged the people of Shantinagar to make the most of the opportunity provided by the Library and Center – to learn to read, to write and develop and dwell together peacefully. He expressed the hope that POPLAC would become a model for the whole country.