In February 2002, Colombian President Andres Pastrana terminated the Switzerland size “peace territory” given to the Revolutionary Armed Forces of Colombia (FARC) guerrillas three years ago to promote peace talks, and initiated a military campaign to drive out the rebels.

Only a week before on February 13, some of the presidential candidates had visited “Los Pozos,” headquarters for FARC talks near San Vicente del Caguan. Pastrana’s action came as a plane carrying a prominent senator was hijacked and a bridge was blown up, killing a pregnant woman as she was being transported to the hospital to give birth.

From time to time, one movement controls the political scene, and then another. Presently, the FARC dominates insurgency status, but there is mounting evidence that his group, in an attempt to further its revolutionary cause, is beginning to cross neighbouring borders, where it often finds ideological sympathizers from existing movements.

In this context, Dr. van der Bijl (President) and Dr. Schut (Vice-President) of the SALT Foundation (Serving and Learning Together) based in Holland, visited Colombia during the week of February 10-17 to support the peace efforts of the Colombian church through the Evangelical Alliance of Colombia (CEDECOL). This is their report:

In separate meetings with the ELN (National Liberation Movement) and AUC (United Colombian Self Defense Groups), and representatives of the SALT Foundation met with top leaders of these movements to support the national peace efforts of the evangelical church headed by CEDECOL. As a result, both of these groups made commitments to respect the evangelical church.

At a Christian leader’s meeting, Hector Pardo, head of CEDECOL, communicated the need “for the church to be fully represented in the peace process.” As such, he expressed gratefulness for the support of the SALT Foundation “to promote an international support for this national priority.” Rev. Pardo affirmed the five points of a press release dated February 1, including the second point as follows:

“CEDECOL rejects proposals that establish war as the solution to the armed conflict that has affected Colombians for over 50 years, and requests the international community, the United Nations, as well as representatives of the FARC, ELN, Self Defense Groups and the government, to seek out a politically negotiated settlement that will remove civil society as targets of violent acts.”

According to Ricardo Esquivia, head of the peace commission for CEDECOL, “The evangelical church is suffering the consequences of this war in all the national territory. As such, it exists in areas controlled by the government, the FARC and ELN guerrillas, as well as the Self Defense Groups (AUC).”

“It is for this reason,” said SALT Foundation vice-president Evert Schut, “that we are here to support all of the church in all of the national territory. We have come to ask the participants in the conflict to respect the church and its desire to be a place of peace and refuge. We also want to help the church maintain a Christ-centered testimony in the midst of this conflict.” 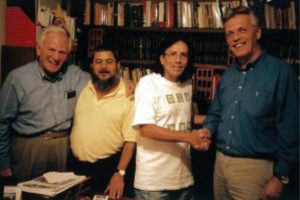 In a meeting with commanders Francisco Galan and Felipe Torres of the ELN, they communicated to the SALT delegation that “the ELN commits itself to respect the church”

In a meeting with commanders Francisco Galan and Felipe Torres of the ELN, they communicated to the SALT delegation that “the ELN commits itself to respect the church; including its ministers, liturgy, and activities.” According to these commanders, “Our movement has religious leaders among its founders, which leads us to respect those who have a religious conviction in the present.”

They also invited CEDECOL to develop a mutual agenda with the evangelical church that can be supported internationally. The idea of a “Colombian agenda and solution, with international support” was affirmed by both ELN and the SALT delegation.
When Salvatore Mancuso, the new military commander of the AUC, joined the meeting, he affirmed unequivocally that “the AUC respects the freedom of religion in the regions which we control. We do not target the church,” he said. He also welcomed the SALT delegation to invite international observers, as long as they came through CEDECOL.At a meeting in the department (state) of Cordoba, the delegation met with leaders of Colombia’s Self Defense Groups (AUC), including commander “Don Miguel,” who affirmed his conviction that “a nation without God is a nation that is dead.” 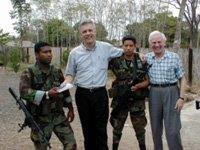 It was interesting for the SALT delegation to note that both Commander Mancuso and the ELN commanders — who fight each other — share a common insight. According to both, the origin of their movements have the same source or genesis, the lack of presence of the Colombian state in the areas of justice, education, and ability to protect its citizens.

Dr. van der Bijl stated that it is very important for all the actors and victims of the conflict to know that, “if a church is closed, a pastor is threatened, a believer is forced to become a refugee, it is important that they know they are not alone. God is with them, and so is the body of Christ in Colombia and around the world.”

In the ongoing process of support for the Colombian church through CEDECOL, the SALT foundation hopes to communicate this same message to the Colombian government and the FARC movement in person in the near future.